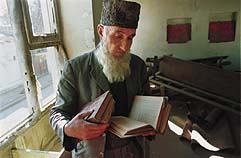 Yitzhak Levy reads a religious book while standing inside the synagogue in Kabul, Afghanistan where he once presided as rabbi.
Photo by: Tasgola Karla Bruner
(Please use all three names.)
Copyright 1999
One-time use only
Questions: +92300-545467 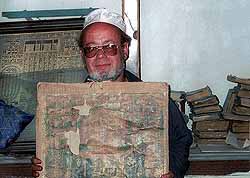 ADVANCE FOR FRIDAY AMS, AUG. 24–Zebulon Simentov, 42, holds a peeling poster containing Judaic themes in Kabul, Afghanistan, June 6, 2001. Kabul’s last two Jews, Simentov and Ishaq Levin live at separate ends of the same decaying synagogue in the capital of Kabul and are feuding, each claiming to be the rightful owner of the synagogue and its paraphernalia. (AP Photo/Steven Gutkin)

Zebulon Simentov, 42, holds a peeling poster containing Judaic themes in Kabul, Afghanistan. Kabul’s last two Jews, Simentov and Isaq Levin live at separate ends of the same decaying synagogue in the capital of Kabul and are feuding, each claiming to be the rightful owner of the synagogue and its paraphernalia.
Steven Gutkin/AP
KABUL, Afghanistan — The Jewish community in Afghanistan was once a proud one, with 40,000 people, flourishing businesses and a distinctive Torah design.
But the population eroded through the last century, and recent decades have seen the Soviet invasion, civil war and the rise of the radical Islamic Taliban movement to power.
Now, as far as anyone knows, the community has dwindled to just two men — and they dislike each other. What’s worse, their sole remaining Torah has been confiscated.
Afghanistan’s last two Jews — Ishaq Levin and Zebulon Simentov — live at separate ends of the same decaying synagogue in the Afghan capital and are feuding, each claiming to be the rightful owner of the synagogue and its paraphernalia.
”Sometimes he tries to talk to me but I don’t like him. I turn my head,” Simentov said.
The men are reluctant to say much about their relationship with the Taliban or to comment on a recent Taliban ruling, so far not implemented, requiring Hindus to wear a yellow cloth on their shirt pockets to distinguish them from Muslims.
The ruling doesn’t apply to other religions and is intended, the Taliban says, to exempt Hindus from the stern rules imposed by the religious police. But it has been strongly condemned abroad as reminiscent of how the Nazis treated Jews.
Simentov said no ruling could sway his faith.
”Even if they try to kill me,” he said, ”I will remain a Jew.”
Simentov is 42, Levin a good 30 years older though unsure of his age.
After Israel came into being in 1948, most of the 5,000 Jews still in Afghanistan emigrated there, but Levin stayed. He was the synagogue’s shamash, or caretaker, before the Soviets invaded Afghanistan in 1979, when most of the remaining Jews left.
Levin rides a bicycle around Kabul and is known to his friendly Muslim neighbors as ”mullah,” or ”rabbi,” even though he is not one.
Between 1992 and 1996, civil war during the time that ousted defense chief Ahmed Shah Massood ruled killed nearly 50,000 people in the capital.
”I was in the synagogue alone when Kabul came under rocket fire,” Levin said. ”But God is great,” he added, in Hebrew.
Standing on a tattered carpet in his darkened room near the synagogue’s sanctuary, Levin lit Sabbath candles one recent Friday night but could remember only about half the blessing.
In the past, he earned a living by telling Muslim women their fortunes and prescribing medicine and love potions for them — a practice that once landed him in a Taliban jail.
Despite the harsh brand of Islam they impose on Muslims, Afghanistan’s Taliban rulers have allowed the country’s minority religions — Sikhs, Hindus and these remaining Jews — to practice their faith largely unhindered.
Yet both Levin and Simentov have been jailed after being reported by the other for alleged offenses ranging from religious harassment to running a brothel.
Simentov produced photos of bruises on his body which he said were inflicted by the Taliban after Levin went to the authorities, claimed to be a Muslim and insisted Simentov wouldn’t let him practice his religion.
Each denies the other’s accusations.
Two years ago the Torah scroll, the holiest object in the synagogue, was confiscated. It’s not clear exactly why or by whom, and no one at the Taliban’s Interior Ministry or police would comment.
Simentov accused Levin of wanting to sell the Torah. Levin said Simentov asked the Taliban to take it for safekeeping.
The Jews of Afghanistan and eastern Persia — today’s Iran — have their own Torah design that uses one flat and two round finials to wrap the holy scrolls. The rest of the world’s Jews use just one pair.
Born in Herat, the other Afghan city where Judaism once flourished, Simentov spent much of his life outside of Afghanistan but returned three years ago to set up a carpet business.
He also brought money donated by Afghan Jews in Israel for a guardhouse and wall around Kabul’s Jewish cemetery, where dry weeds and rocks cover tombstones destroyed by civil war.
Simentov said he faithfully executed the mission. Both men say they have wives and children living in Israel, but stay in Afghanistan because they are owed money here.
Despite large-scale emigration since 1948, an AP reporter who visited the Kabul synagogue in 1980, just after the Soviets invaded, found about 150 Jews attending a lively Sabbath service, highlighted by the ritual circumcision of a newborn Jewish boy.
Now that boy is gone, and the walls of the synagogue are peeling. The windows are shattered and old prayer books are crumbling in the holy ark. The community, too, seems to be coming to a shabby end.
”I begged him not to be my enemy,” Levin said. ”If I die tomorrow, who will bury me in the traditions of my religion?”

This article published in the Athens Banner-Herald on Saturday, August 25, 2001.