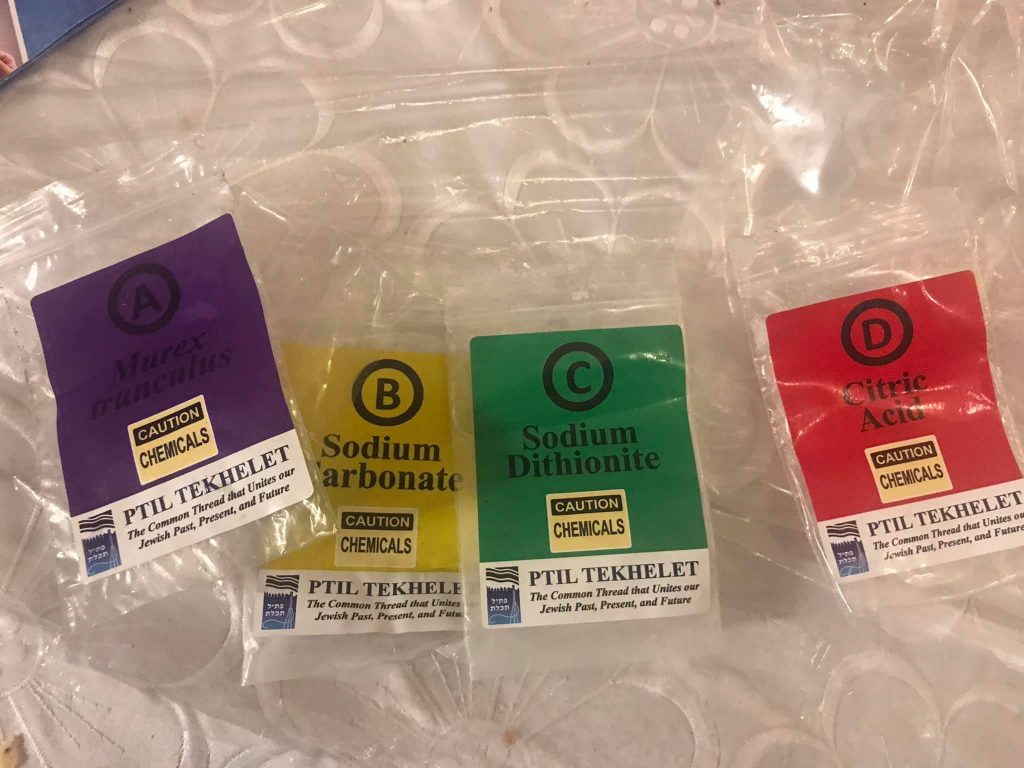 A few weeks ago I ran some dyeing experiments to test:

a) if dyeing murex trunculus wool at night will produce blue,

b) if it’s purple, if heat will turn it blue without UV rays from sunlight (as Ptil Tekhelet advocates), and

c) disprove the notion that ancient dyers used this only for “purple” as we know it because only clay pots were used in ancient times, since per b) the assumption is that only sunlight will turn it blue.

What’s worth nothing is that I ran dye experiments before during the day and had a difficult time making purple. My Muslim colleague in Tunisia, Mohammed Ghassen Nouira, claims that when he dyes with the murex trunculus snail, he gets his best blues at night. Dr. Israel Ziderman in contrast claims that heat, whether it’s through sunlight or water will turn it blue regardless. So I put it to the test using Ptil’s “dye in a box” kit. 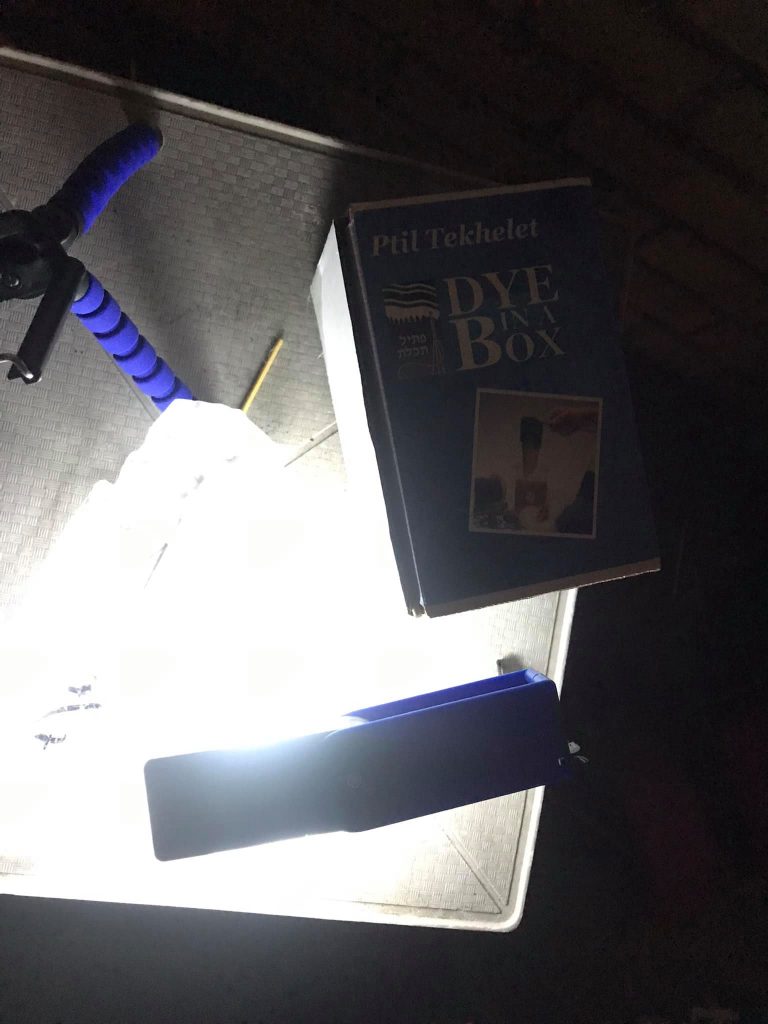 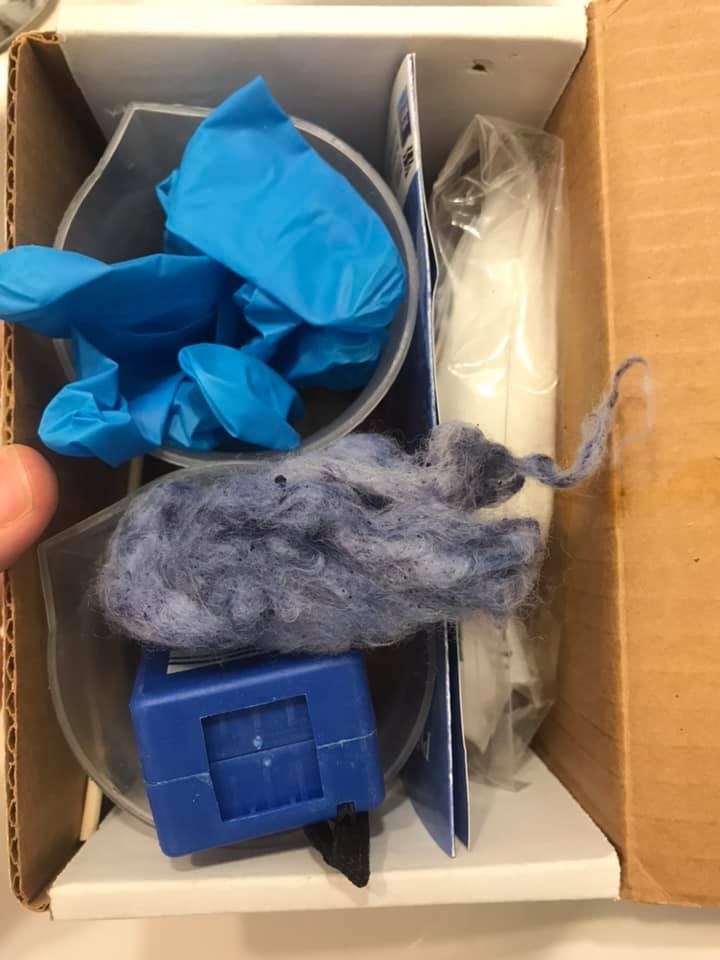 Result # 1, with the wool color compared to the blue color of gloves and a flashlight used. 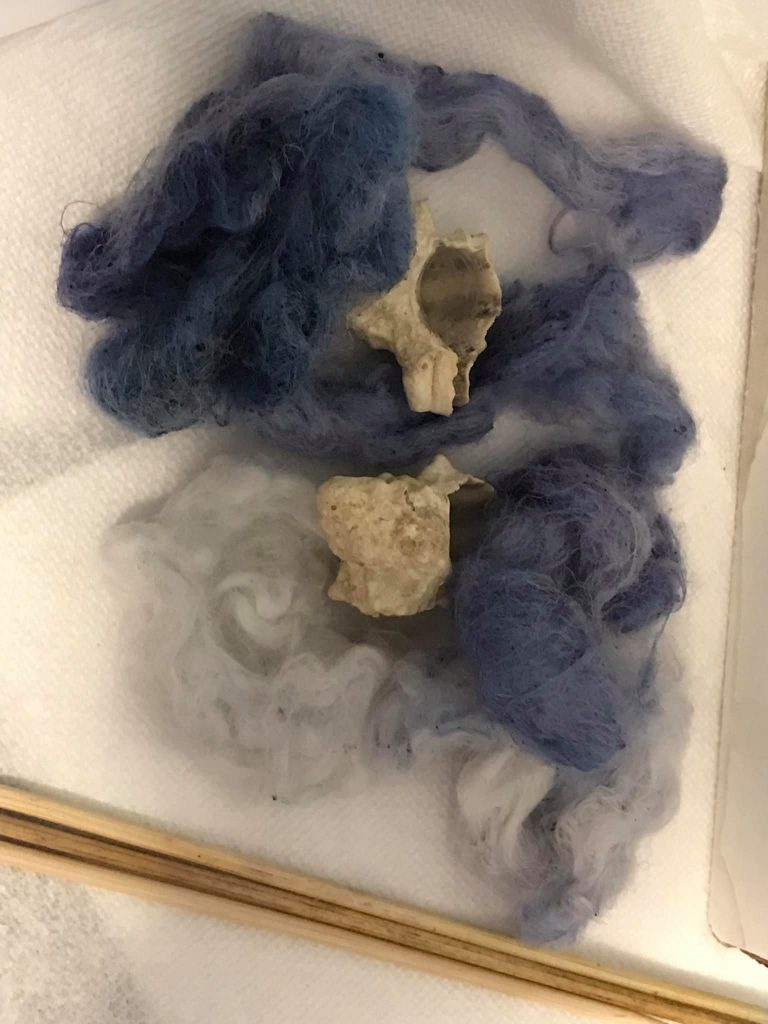 Result from experiments 1-3. The second result was a dud. It might have been the result of not leaving it immersed in the solution long enough.

After the first experiment, I immersed half the wool tuft in boiling water from a kettle, in a standard paper cup. I then let it sit for a few hours. 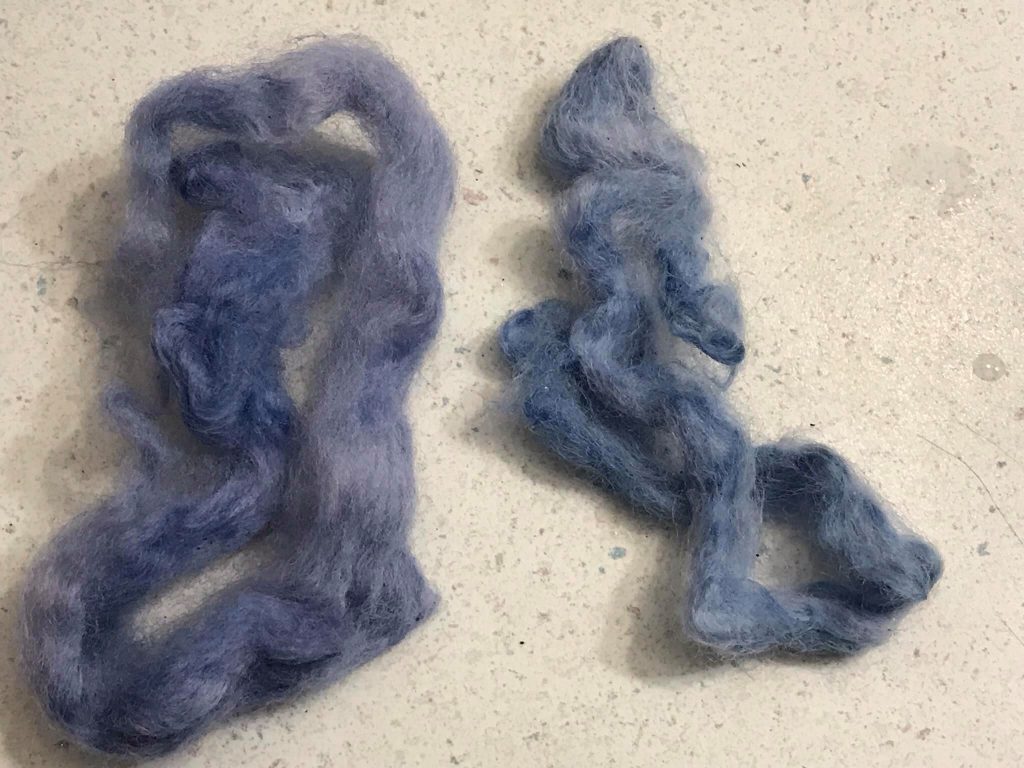 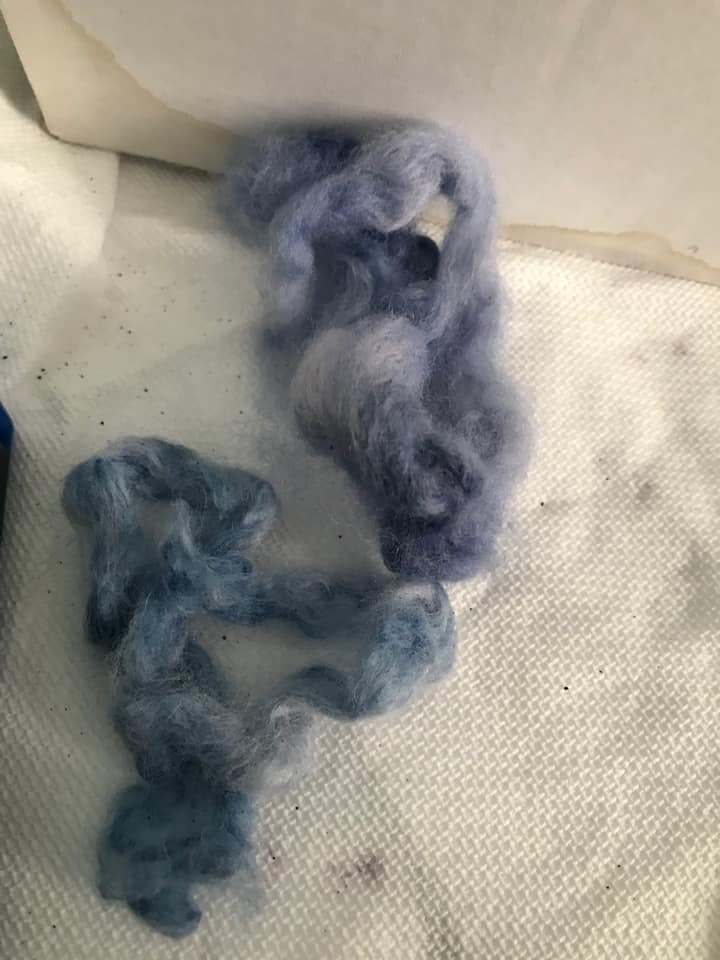 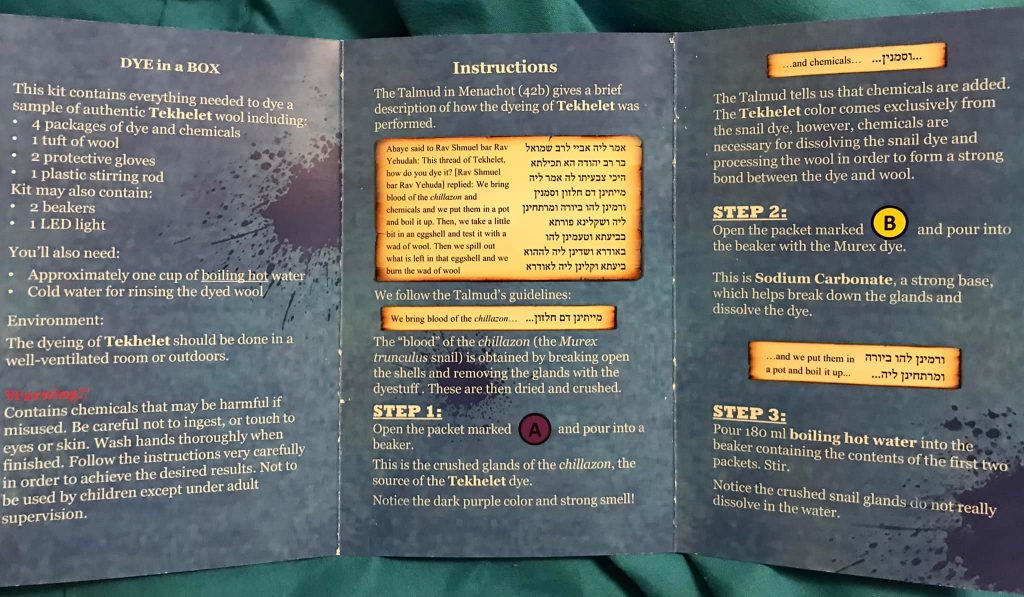 So how do the modern chemicals compare to Pliny’s method?

1. Snail glands. This is produced in dried form, but the best (and in ancient times) is done in fresh form.
2. Sodium carbonate. This is an extremely strong base, with the purpose of dissolving the glands. In Pliny’s time which he documented, soda ash was used (and can be created today out of baking soda) but this would likely take a lot longer to dissolve, with more of the solution needed, also in part to neutralize the acid used as a reducing agent. This uses, as Tim Allen in Home Improvement would put it, “more power.” This is almost like using a microwave oven to heat your food quicker than, say, placing food in a pot over a flame.
3. Sodium Dithionate. This salt is a base used as a reducing agent which will form the leuco state from purple to blue (converts the dye to an alkali-soluble form called leuco), but in its non oxygenated state it looks yellowish. This acid in ancient times was done using bacteria from natural ingredients (notice how food two weeks past it’s expiration, when accidentally eaten, tastes very acidic). The acid is also used in part to counteract the base and help normalize the pH level.
pH level is very important to maintain. A pH level of 2, let’s say, can burn a hole through the ground. And a pH level too high (max is 14) is also extremely dangerous. Normal drinking water for example has a pH level of 7.
4. Citric acid. This acid is used to further neutralize the base from the Sodium Carbonate, since “too much base” was used earlier and the pH level needs to be neutralized further. If playing around with acid-base ratios this would be an optional ingredient since the “tasting” process would be used instead to test alkalinity. Today a pH meter can be purchased from Amazon for that test if you choose the manual route. Nevertheless this is a perfectly natural ingredient found in lemon juice, for example, and there’s no reason why this couldn’t have been used with the bacteria acid solution in ancient times.

Post-Experiment 1: Soaking the wool in Bleach

To test the color’s permanence, I used the best household I had on hand – counter bleach. I used a twisted Techeiles string from a set of strings I tied before and trimmed, and a stripped mini-tuft of wool. The result: no color loss. 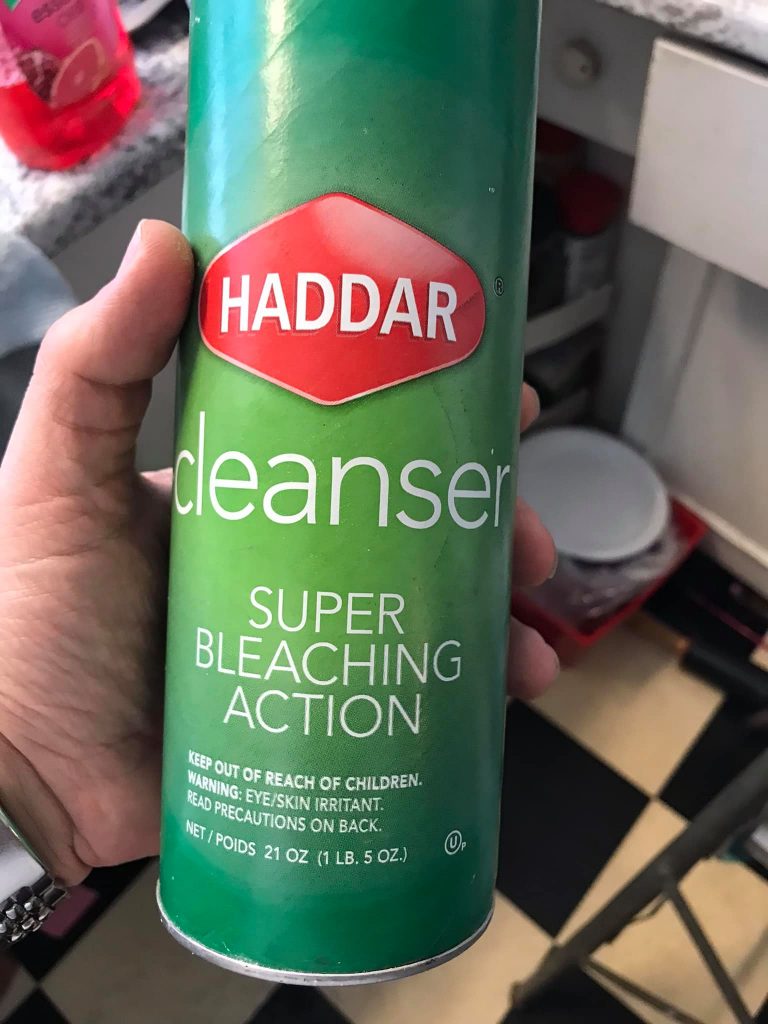 Bleach solution used – for counter use only. 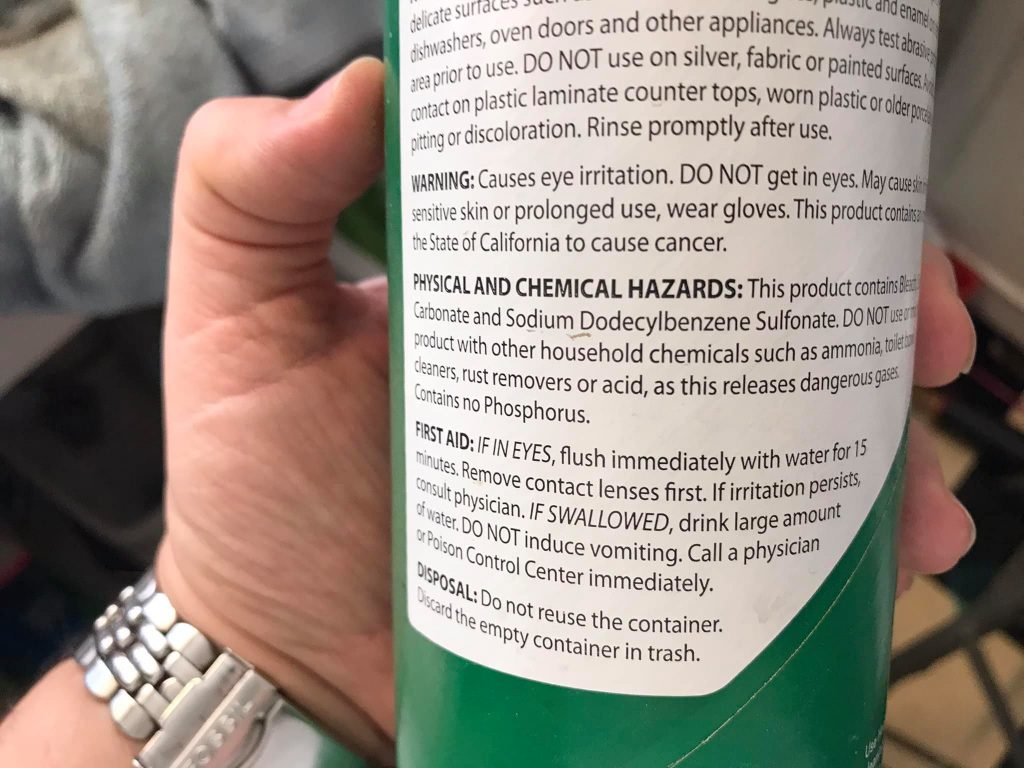 Notice this is a chemical hazard and is not fabric friendly. 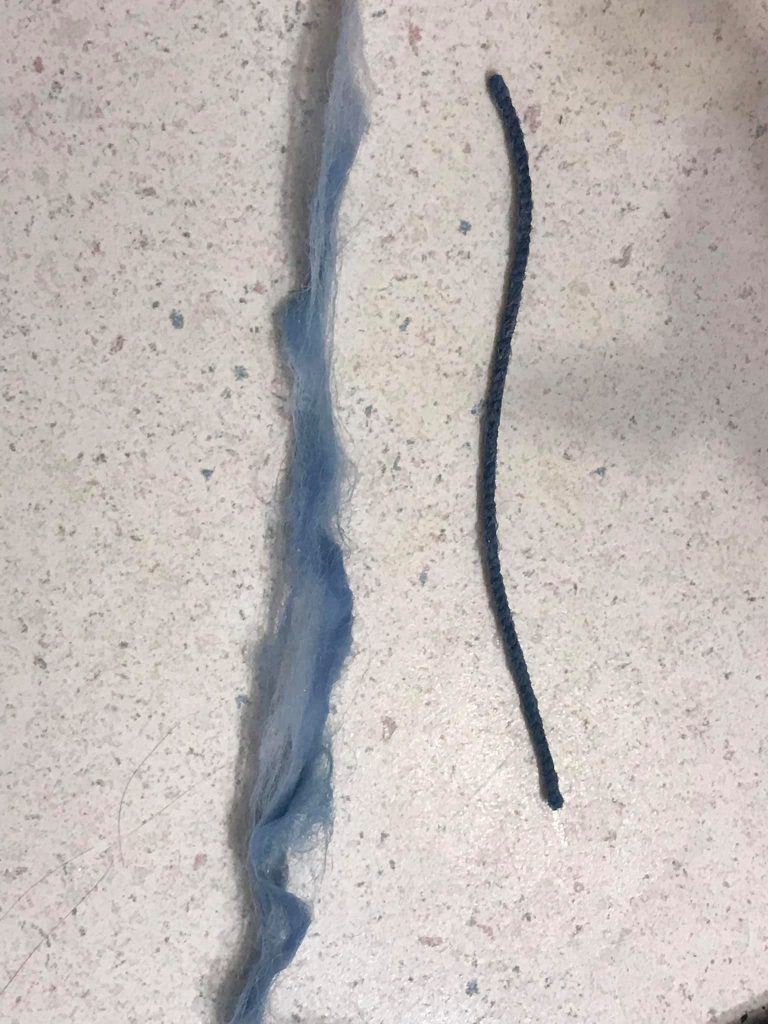 It should also be noted that Rabbi Chaim Twerski already tested this with pure bleach years ago. While the wool dissolved, the color didn’t change.

Ran is a very popular brand in Israel. This Sodium Percarbonate solution does an excellent job in cleaning fabrics and logically, there’s no point in testing it since it’s meant to be eco-friendly. As Wikipedia summarizes it:

Sodium percarbonate is a chemical substance with formula Na2H3CO6. It is an adduct of sodium carbonate (“soda ash” or “washing soda”) and hydrogen peroxide (that is, a perhydrate) whose formula is more properly written as  Na2CO3 · 3 H2O2. It is a colorless, crystalline, hygroscopic and water-soluble solid. It is sometimes abbreviated as SPC. It contains 32.5% by weight of hydrogen peroxide.

The product is used in some eco-friendly bleaches and other cleaning products. However, we westerners are cautious of using it for certain things, so this was put to the test. The result: no color change. 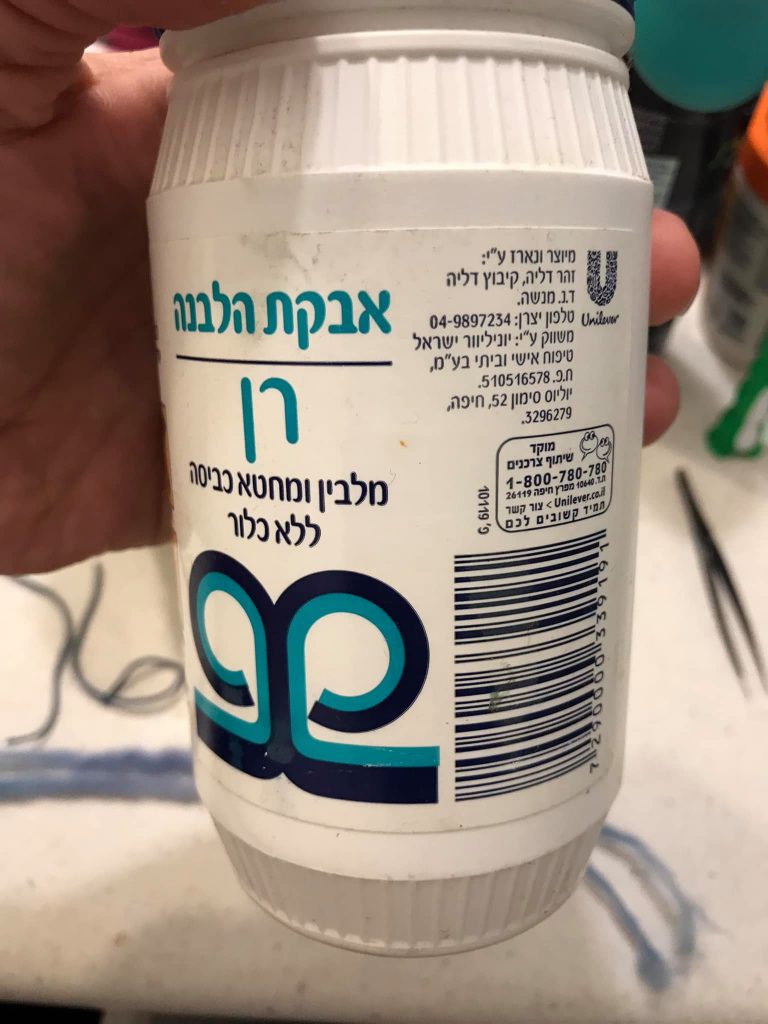 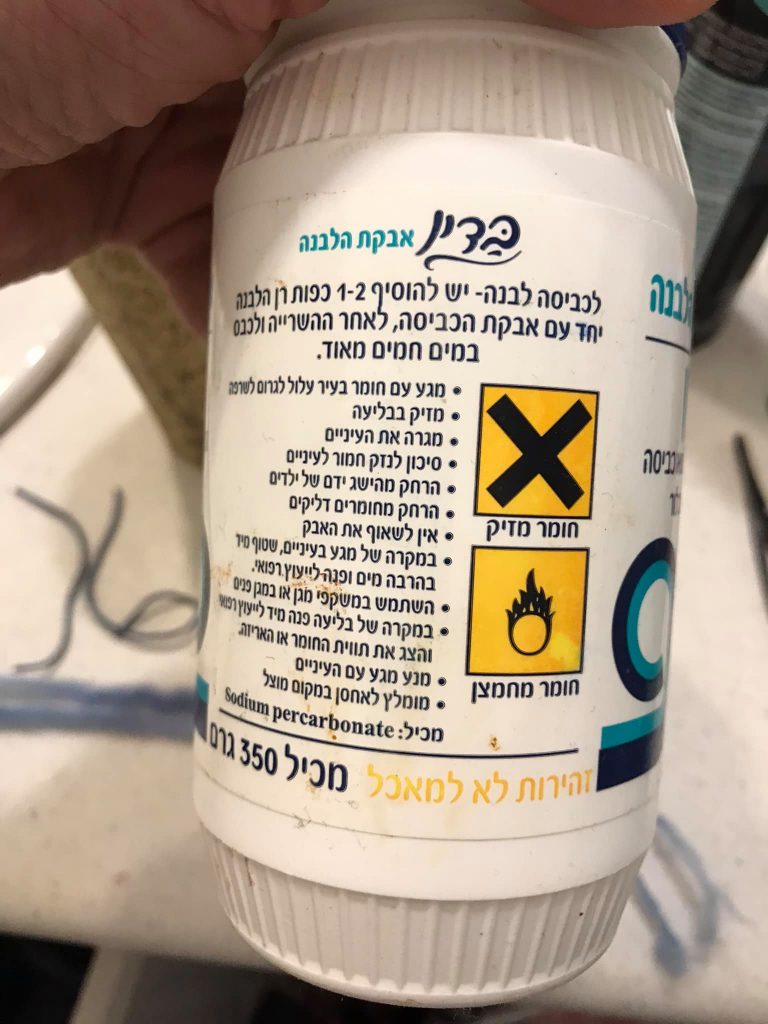 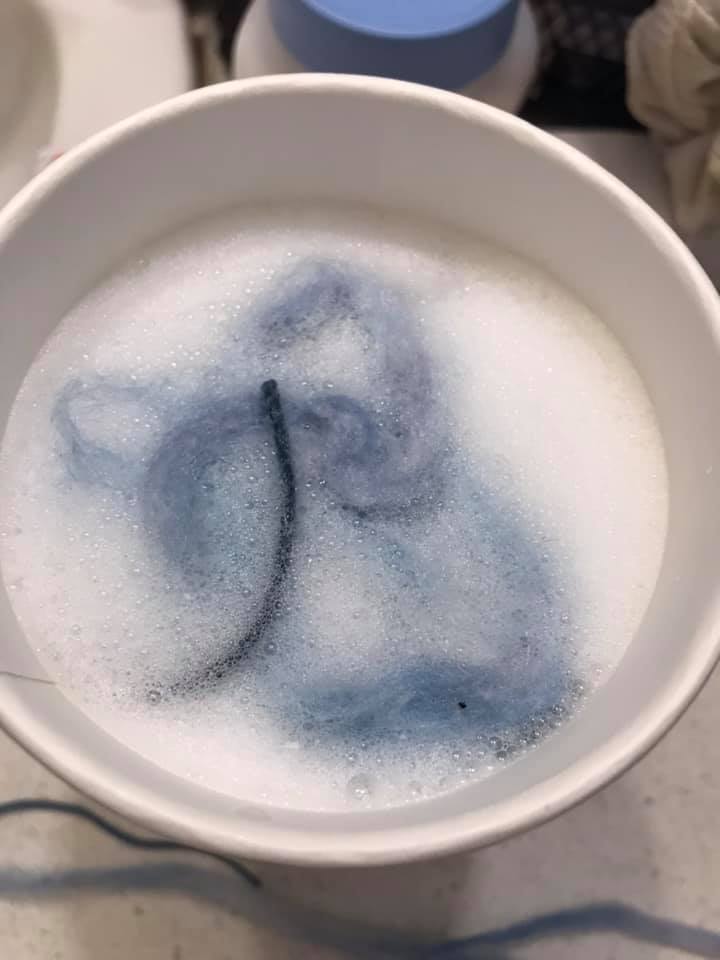